The condition of the Buchanans Drain site (MR261BUCH1) was assessed between 16 and 17 November 2017, over a 100 m length of stream. This site is in the lower catchment of the Buchanan’s Drain; a small, ephemeral tributary of the Murray River, discharging near the town of Ravenswood. The site is situated in the upstream end of a pool in the only area of permanent water in the system.

Sampling followed a dry, warm end to spring, with water levels having fallen noticeably in the month prior. At the time there the site was not flowing, however water was observed flowing over the rock wall/riffle at South Yunderup Road (750 m downstream of the sampling site) during October 2017.

Buchanan’s Drain Wetland site is categorised as a conservation category wetland in the Department of Biodiversity, Conservation and Attractions’ Geomorphic Wetlands spatial dataset, however there is little data on its current condition to inform management requirements.

The site had an intact and healthy native riparian tree layer, although other native vegetation layers were reduced, and the ground layer was predominantly exotic grass.

Despite past clearing and grazing, the banks and stream bed are relatively stable and at low risk of change. This is due to fencing to restrict stock access (protecting bank vegetation) and the gentle slope of the land; meaning erosive forces are low.

Aquatic habitat was diverse, with a variety of types and sizes of woody debris, macrophytes, detritus, draping vegetation and shade, and variable depth and substrate types.

Four native fish and crayfish were collected, and recruitment was observed, however exotic species dominated catches. The high abundance of feral species, particularly the eastern mosquitofish and goldfish, pose a risk to native populations. Native long necked turtles, motorbike frogs and a diverse range of macroinvertebrates were also observed.

Management to reduce nutrient loads is recommended, both to improve health of the Buchannan’s Drain site and the Murray River into which it flows.

Work is already underway throughout the Peel region to implement best practice rural land management practices within programs such as the Sustainable Agriculture Strategy under the Regional Estuaries Initiative, and by the Peel Harvey Catchment Council. This includes fencing to reduce livestock access to the waterway, restoring riparian vegetation, and reducing fertiliser use in the catchment.

Restoration of fringing vegetation is critically important to our riverine ecosystems to build resilience against invasion of aquatic species and declining water levels (given climate change and increased demand).

The Buchanan’s Drain catchment lies completely within the Swan Coastal Plain, being a near-coastal, low-lying sandy plain. The assessment site was within the lower catchment of the Drain and within the largest of only a few permanent pools in the system.

The assessment site was a 100 m stretch of river, approximately 100 m downstream of the upstream extent of a 900 m long pool- the pool was the largest of only a few permanent water areas within the system (see Flow and connectivity).

Between spring and autumn, when the pool was disconnected, the pool appears as a palustrine habitat, with the boundary between land and water only being defined by water level (i.e. no defined bank) and more generally by the location of riparian vegetation (see Gallery). It was a relatively wide, shallow pool with an average width and depth of the site was 25-30 m and 0.5 m respectively. 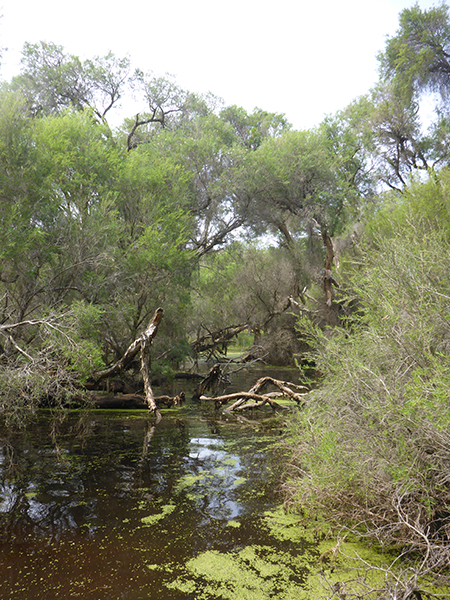 There was a diverse range of in-stream habitats including dense woody debris throughout most of the site in a variety of sizes, and over half the site was covered with macrophytes (including Ottelia ovalifolia, Triglochin and Potamogeton species).

Substrate was dominated by clay and silt, with silt deposition observed in a number of patches thorough the site. Just over half of the bed substrate was covered by biological substrate comprising algae, detritus and leaves.

The riparian zone provided shading up to 10 m from the margins of the wetland along most (70-95%) of the bank length. Shading was mostly from paperbarks, which were predominantly standing in the water rather than on land, although shrubs and sedges also provided shading of banks along most of the site (90-95% of bank length on both sides). Paperbarks, shrubs, sedges and grasses grew or were draped in the water through the entire site, providing additional shelter and food.

A range of depths from 0.25 m to 1.0 m were recorded throughout the assessment site, and this would equate to a range of flow habitats through winter.

A rock-wall exists at the downstream end of the pool where Buchanan’s Drain passes under the South Yunderup road. A lower section in the middle of the rock wall forms a rock-riffle under winter and early spring flows, however at the time of sampling there was no flow over this structure; representing a complete barrier to fish passage.

The pool is only expected to be connected to channel habitats upstream and downstream during higher winter flows, and fish may only rarely (if at all) be able to travel from the Murray River to the Buchanan’s Drain due to a concrete spillway at the confluence. This spillway is a 100 m long concrete structure with a fall to the river.

Note: blue-spot goby (Pseudogobius olorum) were present in the pool, suggesting at least intermittent upstream fish passage from the Murray River, as this species is an opportunistic estuarine dweller than can move into and through freshwater environments.

The rock riffle is only expected to have a minor impact on connectivity, as the system dries rapidly outside of winter, but it may have some benefit in terms of increasing the permanency of the pool.

The riparian zone (containing species adapted to living at the interface between aquatic and terrestrial environments) was 30-35 m wide on both banks and comprised native trees (paperbarks and flooded gums) with a largely exotic understory; exotic grass with patches of native rushes and sedges, and native shrubs (tea trees). The tree layer was fairly intact within the first 5 m from the waterline but became increasingly scattered further from the water.  Beyond the riparian zone was cleared grazing pasture with occasional mature eucalypt trees.

Fencing is intact on both banks to manage stock access. The reduced coverage of trees and shrubs through the fenced riparian zone is likely a function of historic clearing and grazing, though ongoing short-periods of grazing to reduce exotic grasses will be impacting recruitment.

Overall, the banks were assessed as having excellent structural integrity, however this is unsurprising given the naturally flat banks. A flat bank has a lower risk of erosion as even in high flow conditions the water simply spreads out to occupy the available space, as opposed to systems with a defined channel where flow exerts erosive force on the steeper banks.  The presence of shallow and deep-rooted vegetation along most of the site also helps maintain bank stability.

Nutrient concentrations (total nitrogen 2.6 mg/L and total phosphorus 0.42 mg/L) were both classed as very high based on ANZECC guidelines for south-west waterways. This is typical of an agricultural catchment, due to inputs from manure and fertiliser run off. High nutrient levels increase the risk of deoxygenation events, due to increased algal and bacterial activity, which is a likely stress on the aquatic ecology of the site.

The pH was 7.52 which is within the acceptable ANZECC range. Water colour was 230 TCU (true colour units) which is broadly consistent with observations of tannin staining and typical of Melaleuca (paperbark) dominated systems. Turbidity was moderate at 9 NTU (nephelometric turbidity units). Salinity was in the marginal brackish range at 1233 mg/L TDS (mean over the 24 hours).

The diurnal temperature range was less than 4 °C which is considered optimal; however, the maximum temperature recorded was greater than 25 °C which high; literature has proposed 25 °C as the limit above which aquatic organisms could suffer from thermal stress.

Dissolved oxygen in the water measured over the 24 hour collection period was often outside of optimal conditions being below 4 mg/L for 60% of the 24-hour period and below 2 mg/L at times; the mean value over the 24 hours was less than 4 mg/L. This is expected to place aquatic organisms under stress.

The lower dissolved oxygen concentrations are not unexpected given the low flow conditions and shallow nature of the site, but they are also expected due to the elevated nutrient concentrations entering from the catchment (as explained above).

Note: water quality logger (DO and temperature) location was selected to be generally representative of the site, but it should be noted that with a range of the riparian shading and water depths available, it is likely that the site would offer areas with lower temperatures and higher dissolved oxygen.

As this was the first time this site had been sampled using SWIRC methods, the species expected to occur here (listed below) are based on species reported from studies conducted elsewhere in the catchment. As differences in habitat within a reach naturally influence species distributions, and variability in methods between sampling programs can affect the species caught, so this list is only indicative. 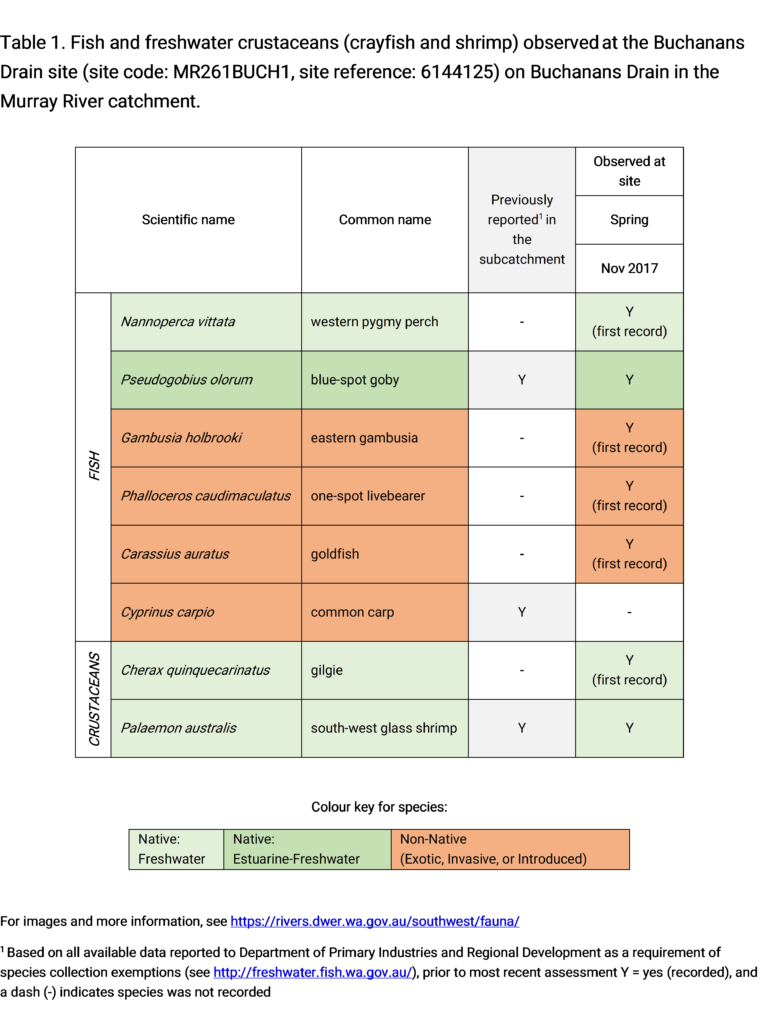 While numbers of gilgie and western pygmy perch were low, there was evidence of recent recruitment. Blue-spot (Swan River) goby were present in higher numbers and there was evidence of recruitment. As the goby are known to move between rivers and estuaries, this may support at least periodic connectivity with the Murray River (see connectivity assessment). While not observed directly the native koonac (Cherax preissi) was identified through observations of active burrows. 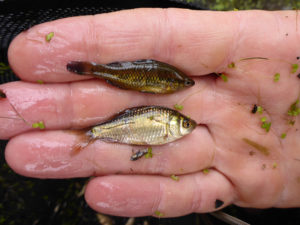 Exotic species dominated the abundance of fish caught at this site, primarily due to large numbers of eastern gambusia and goldfish (which can be confused with native pygmy perch when small – see image) and with evidence of strong recruitment. One-spot livebearer were also present. The considerable number of these exotic species are likely putting pressure on native fish, through habitat destruction, competition, and fin-nipping.

Although not found in this study, the common carp (Cyprinus carpio) has previously been found in the sub-catchment. 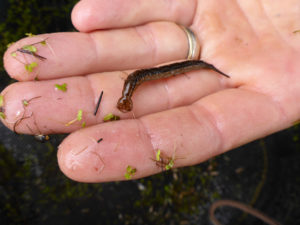 The macroinvertebrate community was not sampled directly, however diving beetles (adult and larvae) and dragonfly larvae were commonly captured in fish traps, along with freshwater crayfish (previously discussed). 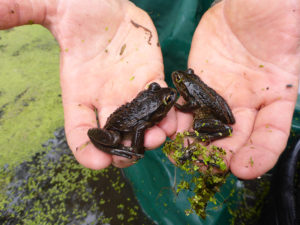