River condition at the Elleker gauging station site (site code: MB61MARB1, site reference: 6031573) on Marbelup Brook has been assessed as part of the Healthy Rivers Program (Healthy Rivers), using standard methods from the  South West Index of River Condition (SWIRC). The SWIRC incorporates field and desktop data from the site and from the broader catchment. Field data collected include the following indicators, assessed over approximately a 100 m length of stream:

Other departmental data: The river health site is located in the vicinity of the departments Elleker flow gauging station (site reference: 603001), which has been in operation since 2012. 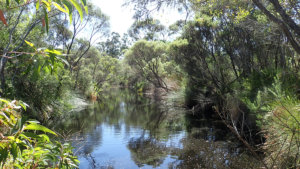 Five native species were recorded at this site in March 2020, this includes three native fish (nightfish, western minnow, western pygmy perch) and two native crustaceans (smooth marron, south-west glass shrimp). One introduced non-native fish, the rainbow trout, was previously recorded in the subcatchment but was not found in this study.

The pouched lamprey is expected in the subcatchment, however this species typically migrates in short periods around peak winter flows and only in high flow years (which is largely outside of the assessment periods).  Outside of the short migration periods, lamprey are unlikely to enter traps and their absence from most SWIRC assessments is not a significant concern. 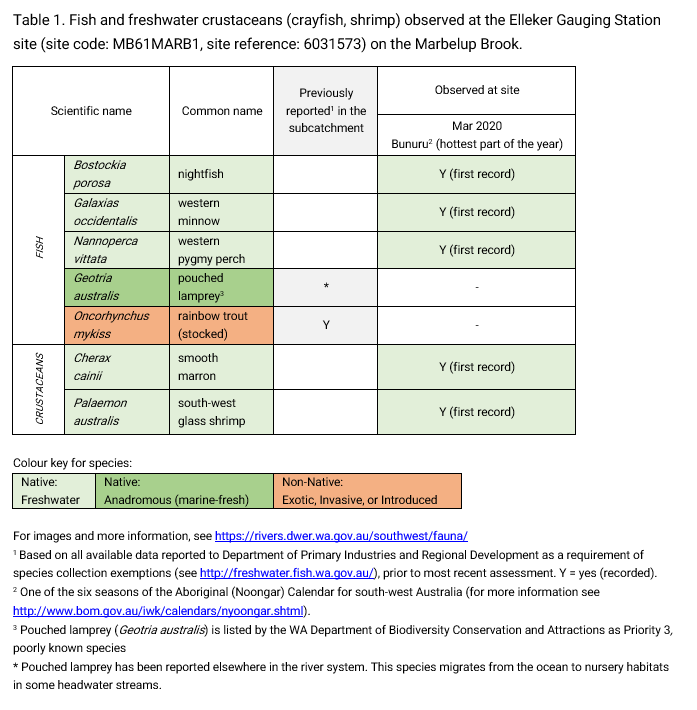 Although not targeted by collection methods a south-western long necked turtle (Chelodina colliei) was recorded during March 2020 assessments.

For more information on this species or other aquatic species, please see the River Science fauna page here