River condition at the Old Millbrook site (site code: KR39MILL1, site reference: 6021695) on Mill Brook has been assessed as part of the Healthy Rivers Program (Healthy Rivers), using standard methods from the South West Index of River Condition (SWIRC). The SWIRC incorporates field and desktop data from the site and from the broader catchment. Field data collected include the following indicators, assessed over approximately a 100 m length of stream:

Other departmental data: The Old Millbrook site is about 400 m upstream of the Warren Road gauging station (site reference: 602015). This gauging station is owned by the department and has been in operation since 1992. 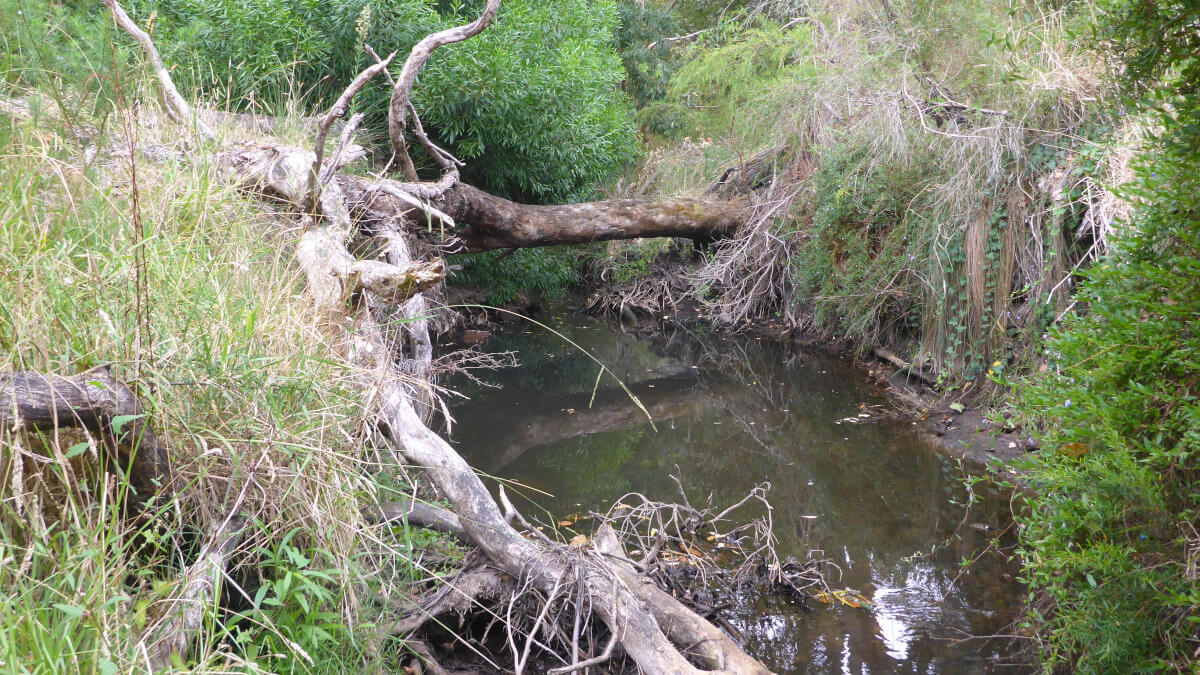 The three species of freshwater fish were found across the full range of size classes (juveniles, adults). A small proportion of the nightfish appeared to be gravid and many of the western pygmy perch showing nuptial (breeding) colours. This suggests that this section of Mill Brook is able to provide suitable habitat and requirements needed for a viable population.

Koonacs were the only species of crayfish recorded at the assessment site, which may provide some insight into the natural hydrology – as koonacs are most common in habitats that dry seasonally. Of note, a pair of gastroliths were found at the assessment site (image in photo gallery below). Gastroliths are calcium stones that are produced in the stomach of the crayfish during the moulting process. The formation of gastroliths is a remarkeable adaptation, where calcium is extracted from the exoskeleton to soften it prior to moulting (making it easier for the animal to escape its old shell) and then reabsorded to quickly harden the new shell after moulting.  The crayfish are most vulnerable while their exoskeleton is soft, which is why undigested or discarded gastroliths are often observed.  For more information on gastroliths, click here.

One non-native fish species was found in the March 2020 assessment. Rainbow trout are stocked annually by the Department of Primary Industries and Regional Development. The purpose of stocking trout is for recreational fishing in inlands water. The annual locations and quantities of trout stocking can be found here. 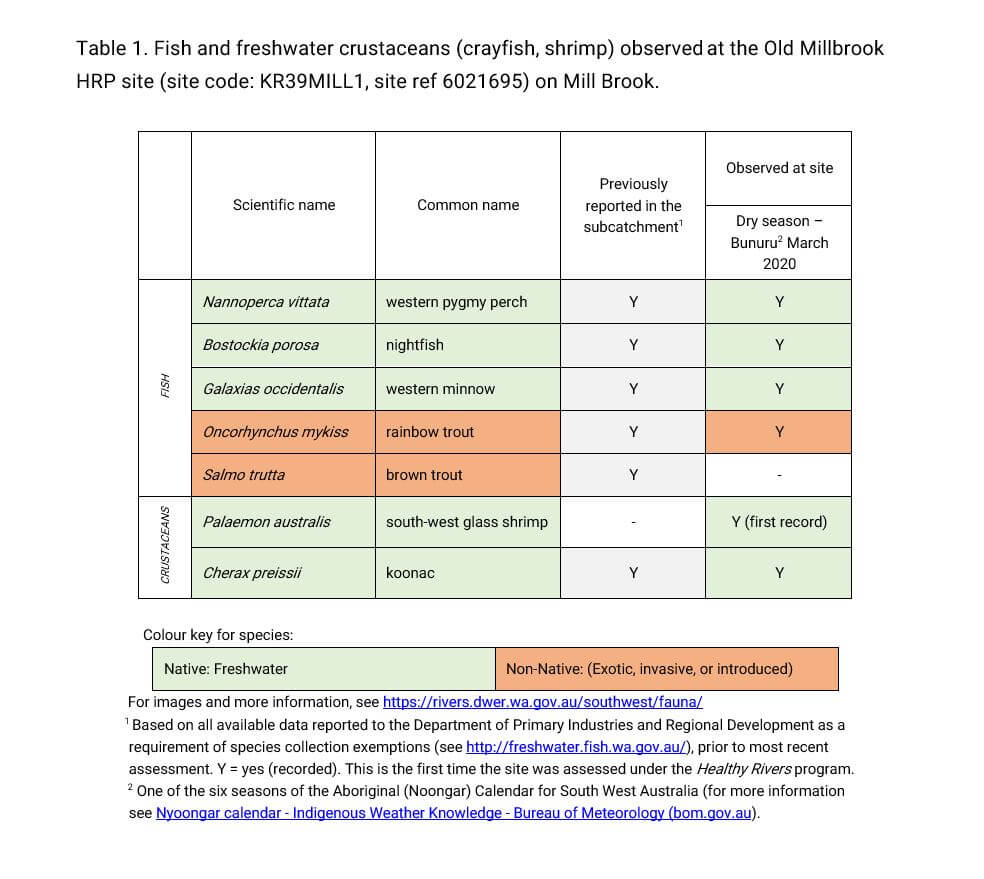 Although not directly targeted as part of the Healthy Rivers assessment, the following species were recorded:

An adult rakali was observed at the Old Millbrook site. The rakali is a Priority 4 species under the 2016 Biodiversity Conservation Act (state, Western Australia) meaning it is a rare or near threatened species in need of monitoring. Rakali have a primary diet consisting of fish and crustaceans, and have been suggested to be a potential bio-indicator of wetland health. They have been shown to prefer areas with riparian vegetation, better water quality and a degree of habitat complexity (Speldewinde et al. 2013), which was evident at this assessment site.

Although not an aquatic species, a pair of little eagles (Hieraaetus morphnoides – endemic to Australia) were also observed during the assessment. The presence of these birds demonstrates a healthy and strong ecosystem as little eagles prefer to nest in areas with mature trees in open woodlands or within an intact corridor of vegetation. They also prey on small mammals, birds and reptiles, suggesting the food web below them is well supported. 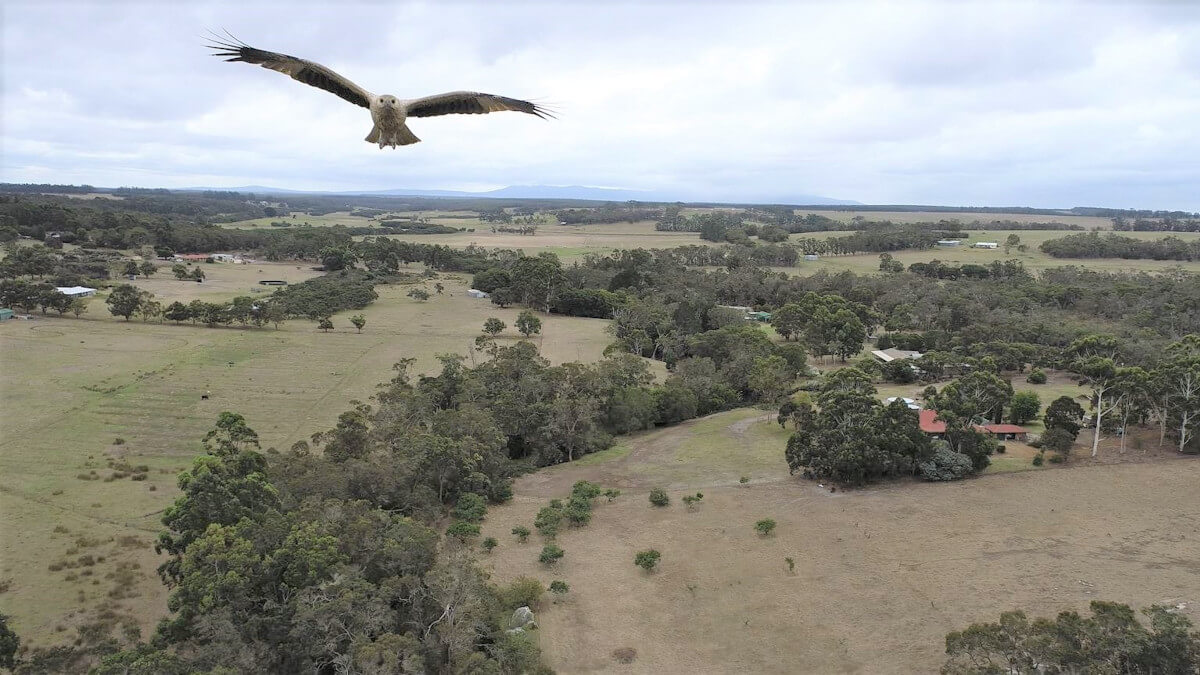 For more info on the rakali and other aquatic species, please see the River Science fauna page here.