River condition at the Plain Road Downstream site (site code: DR15WALP1, site reference: 6064006) on the Walpole River has been assessed as part of the Healthy Rivers Program (Healthy Rivers), using standard methods from the South West Index of River Condition (SWIRC). The SWIRC incorporates field and desktop data from the site and from the broader catchment. Field data collected include the following indicators, assessed over around a 100 m length of stream:

The image below indicates conditions at the time of sampling in March, towards the end of the dry season. March is within the Noongar season of Bunuru, which is generally the driest and hottest part of the year. Further images are provided in the gallery at the bottom of the page, to show general site conditions. 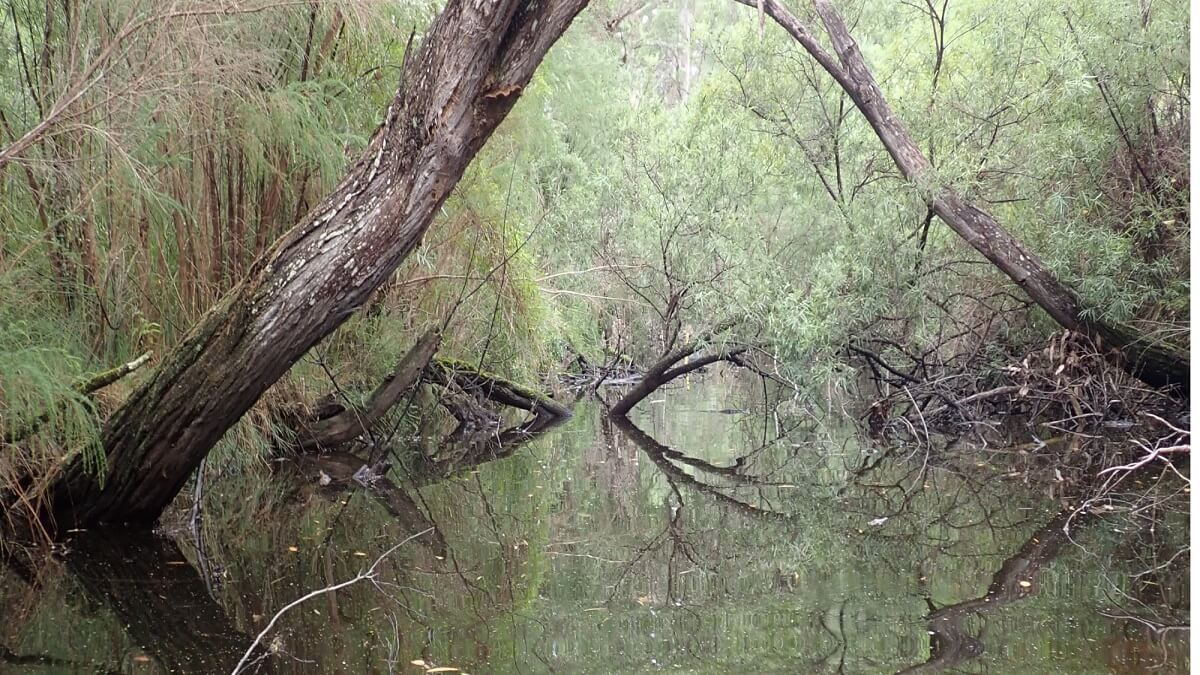 The aquatic biota community in this subcatchment is one of the highest recorded across the South West of Western Australia. Thirteen native species were recorded in this subcatchment in the March 2020 assessment. The species recorded at the assessment site includes three native freshwater fish (little pygmy perch, western pygmy perch and common jollytail), five native estuarine-freshwater fish (south-western goby, blue-spot goby, western hardyhead, sea mullet and southern black bream) and one native crustacean (south-west glass shrimp). Four additional species were found directly below and about 200 m downstream of the Walpole Weir during site investigations (refer to green dots on map below). These species include three native fish (nightfish, Balston’s pygmy perch and western mud minnow) and one native crayfish (smooth marron).

Notably no non-native species were recorded during this assessment. 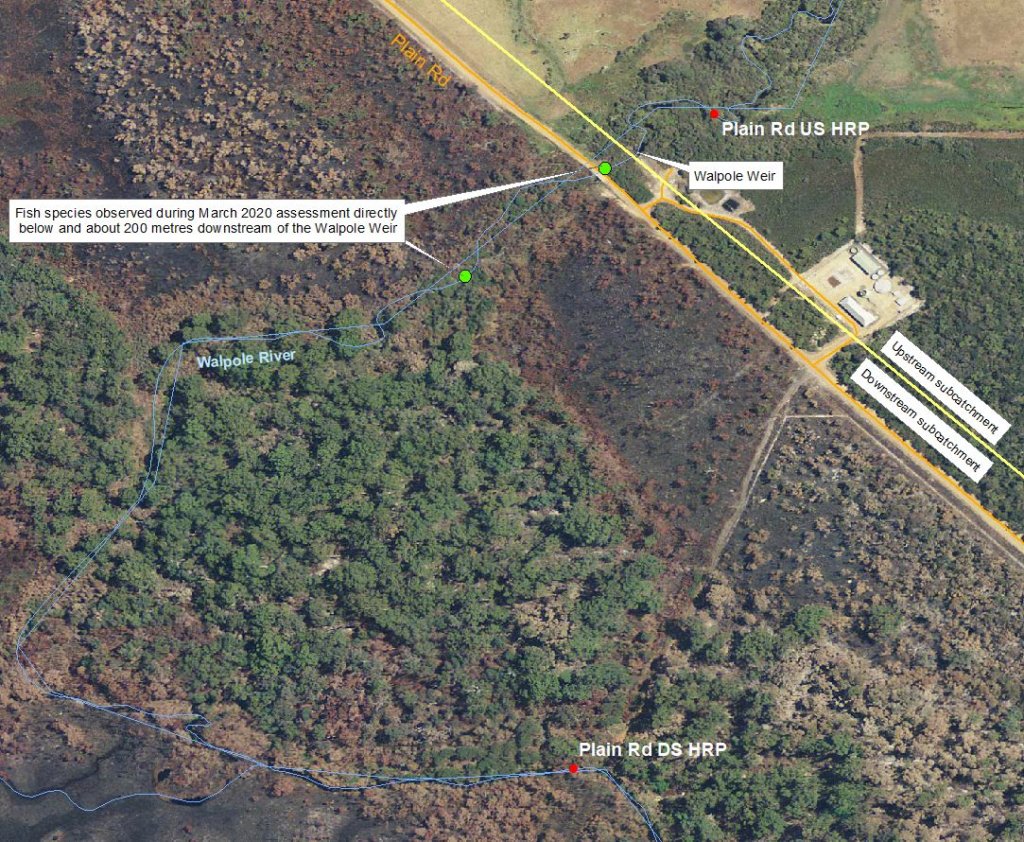 The Plain Road Downstream site is influenced by tidal movements from the Walpole-Nornalup Inlet system. At the time of sampling, the salinity was within the hyper-salinity category with estuarine-freshwater species dominating the catch. The freshwater fish species observed at this assessment site were found in low abundance.

Four of the freshwater fish species found in this subcatchment have high conservation value, these include:

All of the above fish species except the salamanderfish were observed during the March 2020 assessments.

This is the first time little pygmy perch have been recorded in this system. It was only discovered in 2008 (formally described in 2013) and is only found in restricted areas in the southern-most part of Western Australia including Denmark, Mitchell, Hay, Kent and Walpole Rivers and Lake Smith. Little pygmy perch were found in low abundance at the Plain Road Downstream assessment site, with higher abundances recorded at the Plain Road Upstream site, upstream of the Walpole Weir.

The pouched lamprey (both ammocetes and adults)  were found in the Morgan and Beatty (2003) study but not detected in this assessment. The pouched lamprey is a Priority 3 species (poorly-known) under the Biodiversity Conservation Act 2016 (Western Australia). Priority 3 refers to possibly threatened species where data is insufficient to assess threatening processes that could affect them, also noting that this species is not expected to be under imminent threat based on available data.  In the early stage of their life cycle, lamprey burrow in sand in upper reaches of river systems. They migrate to the ocean where they may remain and feed for a number of years. Eventually lamprey will migrate back up river systems to spawn and die. Outside of the short migration periods, lamprey are unlikely to enter traps. The absence of lamprey from most SWIRC assessments is not a significant concern as this species typically migrates in a brief period around peak winter flow (which is largely outside of the usual assessment periods) and only in high flow years.

Salamanderfish were also found by Beatty and Morgan in 2003, however they were only recorded below the Walpole Weir but may occur elsewhere in the system. The salamanderfish was not expected at this specific sites assessed in 2020 as this species is only found in near-coastal wetland and do not typically occur within riverine habitats. 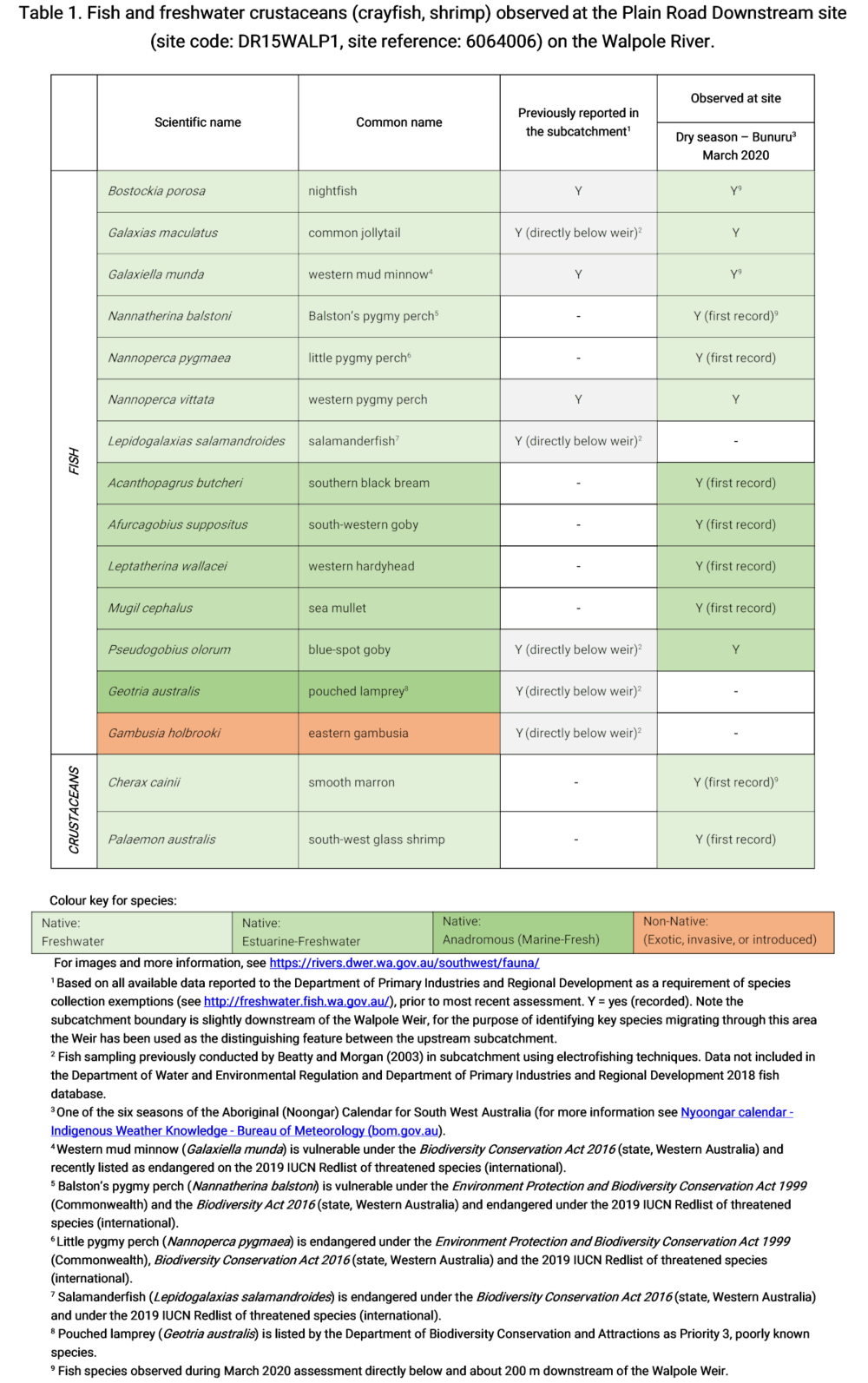 One south-western snake-necked turtle was recorded at this assessment site.

For more info on this and other aquatic species, please see the River Science fauna page here.

References and further reading:
Beatty S and Morgan D 2003, ‘Freshwater Fishes of the Walpole River and the impact of the weir to fish and lamprey migrations’ Fisheries Western Australia