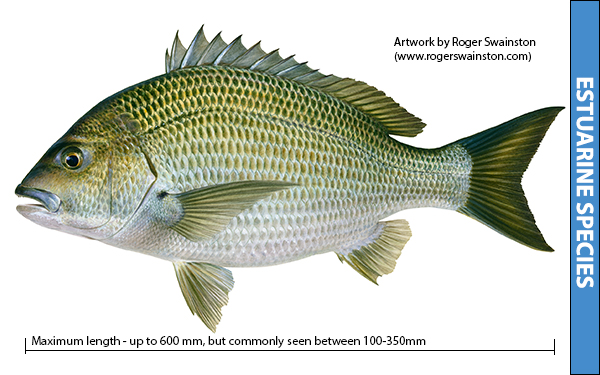 Black Bream are one of the most easily identified and recognisable species in south-western Australia estuaries and lower reaches of rivers.  They are a deep bodied species, a single dorsal fin and have a silver/olive upper body and dark fins and large scales.

Common within estuaries and lower parts of rivers throughout southern Australia, from New South Wales through to the Murchison River in Western Australia. They are also found in rivers through Tasmania, and around some islands (e.g. Flinders and Kangaroo Islands).

Typically found around structure (shelter from predators and also are to ambush prey) including areas of overhanging banks and among large woody debris – with smaller individuals in the shallower areas.

They rarely enter the ocean, and do not migrate readily between estuaries (i.e. populations in different areas are isolated and will display individual behaviours and traits, and are genetically distinct).

Tolerate salinity from freshwater through to hypersaline (saltier than seawater) water. However, recent research has demonstrated that reduced flows due to climate change and river regulation, and hypoxia, can result in reductions in the habitat availability and body condition of the species.

They typically spawn between spring and summer in the vicinity of the salt wedge (the area where freshwater from the river meets the saltwater from the ocean – forming a wedge when the denser freshwater pushes over the denser saltwater). The location of the salt wedge varies through the year, between years and between systems, however at this time of year is generally in the upper parts of estuaries.

Females release thousands of free-floating eggs in a number of batches during the spawning season (fertilised externally), with the largest females reported to produce million of eggs per year.

Larvae hatch after a few days, and will turn into juveniles and settle to the bottom of the estuary after around 1 month .

Age and size at maturity varies between estuaries in south-western Australia, but generally ranges from 1.8 to 4.3 years at between 130 and 220 mm total length.

Some bream are reported to live to almost 30 years.

Black Bream are a critical component of the aquatic ecosystem and also one of the most important recreational and commercial species in the estuaries of south-western Australia.  They are often a key species found during fish kill events and considerable management and research attention has been afforded to understand their movement patterns and habitat requirements in south-western Australia as well as eastern Australia.