Adults are eel-like but lack jaws and have a mouth in the form of a suctorial disk lined with rasping teeth. They also do not possess bones, but are supported by cartilage.

Mature/maturing males have a pouch on the underside of the head, and it is only very recently that the function of the pouch has become known. The gular pouch was first observed by Baker et al. (2017) to massage or move eggs around which are laid in clusters under boulders. During hatching males vigorously rub their gular pouch and ventral surface across the eggs in kneading and rocking motions using both dorsoventral and lateral movements. The gular pouch is used to groom the eggs  and newly hatched larvae and may serve to oxygenate the eggs.

On entering rivers, adults are dark bluish to brownish above and silvery below. Larvae (under 100 mm), called ammocoetes, are brown in colour, blind and worm-like in appearance. Juveniles and ocean going sub-adults are similar in shape to mature adults but are vibrant silvery blue in colour.

Records exist from many of the rivers of the south-west coast from Perth through to Albany, including the Swan, Canning, Serpentine, Capel, Carbunup, Margaret, Blackwood, Donnelly, Warren, Walpole and Goodga systems, however records are sporadic – particularly outside of the south-west corner (Capel to Denmark).

The species is also widespread across the Southern Hemisphere, occurring in south-eastern Australia (including Tasmania), New Zealand, Chile and Argentina.

The species is anadromous (enters rivers from the ocean to spawn) and has a marine parasitic pre-adult stage, where they grow from approximately 10 cm to 60 cm and feed presumably on large fish (see diagram below of the lamprey lifecycle from Salas et al. 2015).

Sub-adults then enter freshwater rivers during winter and spring, moving upstream prior to spawning in the following year; at this time of entry into freshwater they cease feeding (for up to 18 months), and live off their fat reserves, the males developing their gular pouch during this period. Adults die shortly after spawning. Large numbers of lamprey can sometimes be seen below barriers (natural and artificial), as they are held up during migration. Their oral disc (sectorial) allow them to climb vertical obstacles, such as rock bars, waterfalls and weirs.

Ammocoetes (larvae) are eyeless and live buried in sandy stream sediments. They filer-feed on plankton, algae and suspended organic material for up to four years before metamorphosing into their vibrant silver-blue juvenile form, marked by the appearance of eyes, the formation of the oral disc and teeth, and then migrate to the ocean during high flow periods in winter. 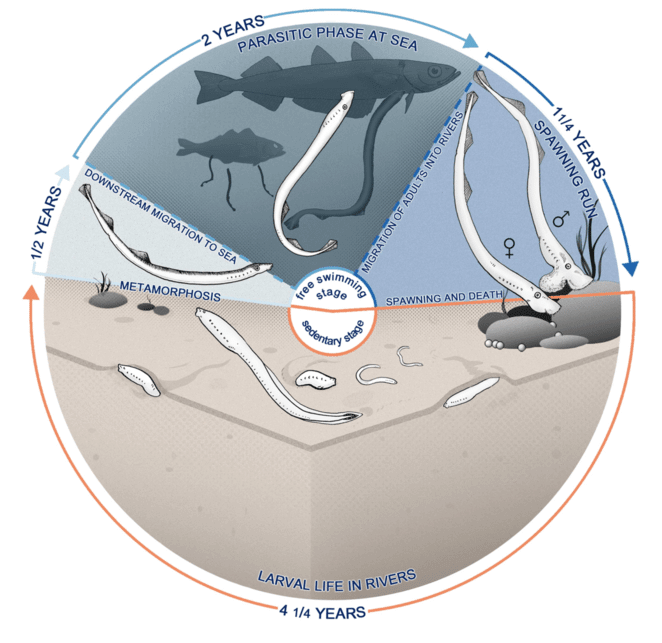 Geotria australis, is listed by the Department of Biodiversity Conservation and Attractions as Priority 3, poorly-known species.

Priority species are those that are possibly threatened species that do not meet survey criteria, or are otherwise data deficient. They are listed under  Priorities 1, 2 or 3. These three categories are ranked in order of priority for survey and evaluation of conservation status so that consideration can be given to their declaration as threatened flora or fauna.

Assessment of Priority codes is based on the Western Australian distribution of the species, unless the distribution in WA is part of a contiguous population extending into adjacent States, as defined by the known spread of locations.